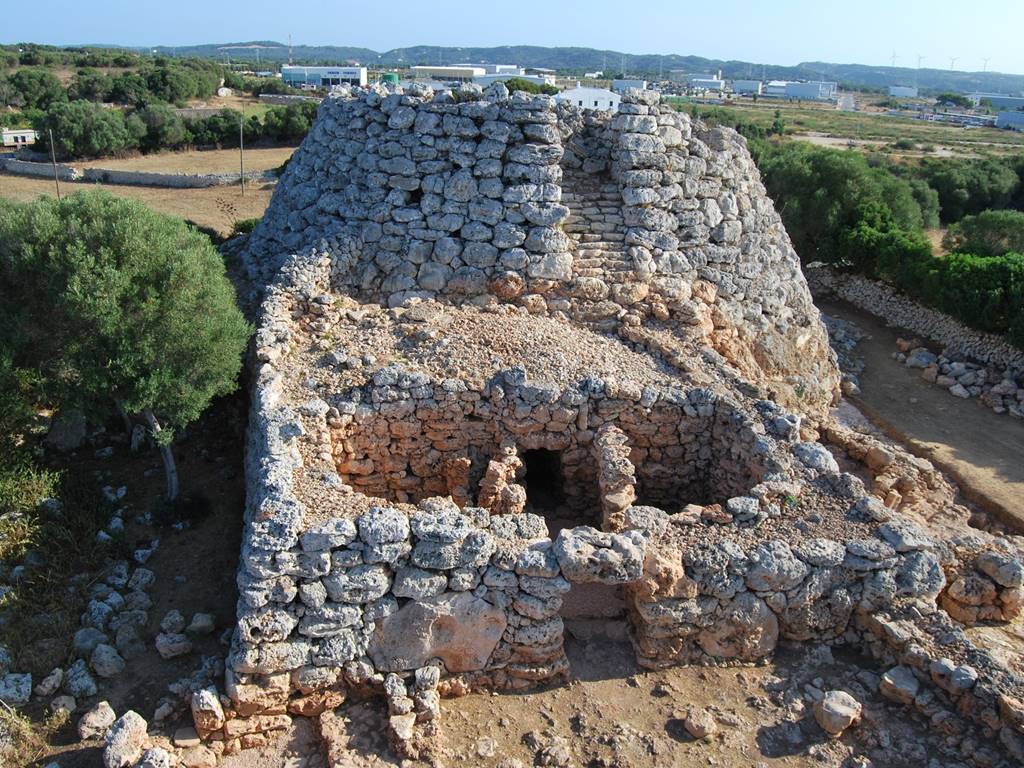 Cornia Nou is a Talayotic settlement located near Maó where, since 2007, a team of archaeologists with ties to the Museu de Menorca, in collaboration with Amics del Museu de Menorca, have been carry out tasks of excavation and restoration.

Hence, the eastern area is occupied by a hill, which still is home to the remains of a wall built using the dry stone technique. To the south-east, on top of this closing wall, stands an average-sized talayot with a circular layout. This talayot was excavated during the 2007 and 2008 campaigns, helping us to understand what the exact interior layout of the building was: a corridor up to 4 m high runs across it from north to south. The walls of this gallery were built using the approximation of rows technique, with a roofing system achieved by the juxtaposition of large stone slabs. A small corridor leads to an elliptical room that is also connected to the corridor through a loophole.

It was also understood that this chamber had been reused as part of a dwelling around the 3rd century BCE, although unfortunately no archaeological strata were found that corresponded to the period of construction. On the north side of the talayot, there are two connected wells, reused as dumping sites while the talayot was used as a dwelling. As evidenced in this part of the archaeological site, the end of the Talayotic era did not leave the settlement abandoned, on the contrary, it was still occupied through the Roman and Islamic periods.

In the western area there is a truncated cone-shape talayot, one of the largest on the island. On the south side there is a door with a monumental stairway approximately half way up, that might have led to the upper area's interior. The upper platform was dug out in 2014, which showed that the large talayot had been erected using concentric rings.

There are two large buildings of rectangular tendency attached to the talayot: the one attached to the south side was excavated from 2008 to 2012, when its internal structure was discovered. It presented two different parts, one of which still has its roof intact.

Inside the building many tools related to food processing were documented, such as hand mills, mortars, strikers, punches. A number of bones of domestic animals were also found; goat, sheep, ox and pig, along with the occasional presence of deer and bird remains. Additionally, a large amount of carbonised grain was documented, used in a combustion structure located in the central corridor, where roasting might have taken place to hull the grains. This archaeological evidence has certainly led us to understand the south building as a management, control and processing centre of food that went beyond mere household uses. It could be that the seizure of resources as well as the monumental nature of the building involved a growing social inequality of the community living in the settlement. According to the 14-carbon dating, it has been discovered that the southern building was still in use in an undetermined moment between 1100-900 BCE and that it may have been abandoned around the 6th century BCE.

There is a second, less monumental building to highlight, located to the west of the talayot. This is a construction with an apsidal layout divided in two spaces. In 2015 the excavation tasks of this building began and the two separate interior areas were identified. The goal of this five-year project of archaeological excavations (2014-2018) is to complete the archaeological tasks, as well as the establishment and restoration processes to prepare it for public visitation.

The archaeological project was promoted by the Museu de Menorca and Amics del Museu de Menorca association under the current management of Montserrat Anglada, Lluís Plantalamor and Damià Ramis. It has been co-funded by the General Research Department of Menorca's Island Council, the Institut Menorquí d’Estudis and the Museu de Menorca. The Institute Royal du Patrimoine Artistique, in Brussels, is another collaborating entity.