GRISAILLES OF THE SANT DIEGO CONVENT IN ALAIOR 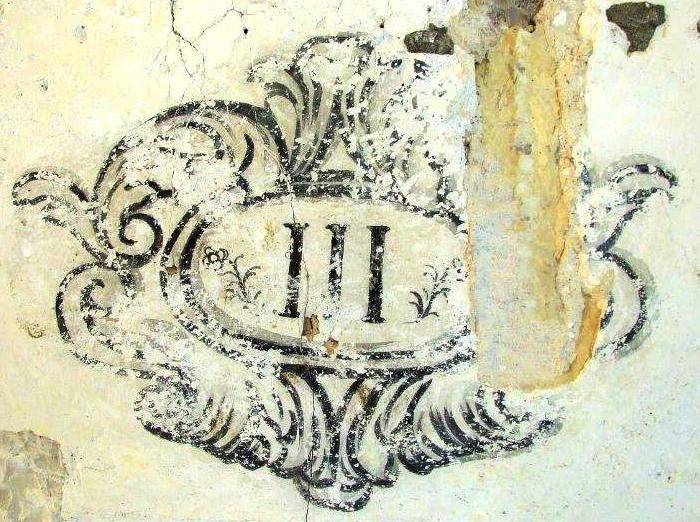 The Sant Diego convent in Alaior was built in the 17th century and was used as a religious building until 1835. Disentailed by the Spanish government, the building was later sold and used in new ways: as a dwelling and also included shoemakers’ workshops. In 2005 it was acquired by the government of the Balearic Islands and is now in the process of renovation.

Despite the fact that it belonged to an austere order, it has very interesting high quality painted decoration like any other religious buildings. The paintings decorate the entire parietal surface on the ground floor and only partially on the first floor.

The decoration of the mural paintings, although they are only grisailles (paintings performed using black and different grayish paint), just like a drawing, shows rich and abundant decoration, friezes and scenes showing people of a lively richness and with a remarkable technical and aesthetical quality. These are very rare paintings due to their extremely technical and historic fragility, and a  rara avis  with regard to Menorcan buildings.

On the first floor, under several layers of lime, plaster and paint, hidden remains are revealed and show, in the style of Baroque decorations, the number of the room belonging to each monk. The restoration works carried out to the building meant that some of them could be altered or removed because they were located in places where structural works had to be carried out on the wall.

Therefore, using sound judgment, and in order to save this rare heritage, it was decided to remove, transfer and restore these paintings that would later be relocated to its original place once the architectural works had been completed.

These mural paintings that decorate the entrance to first-floor rooms (and most certainly as in the rest of the building) and after the physical features are observed, are made using the tempera technique directly on a plaster basis (calcic sulphate CaSO4·2H2O). This plaster basis is a plastering carried out directly on the original wall, of irregular surface, since it presents parts of cut ashlar with marès sandstone (the threshold area) and other parts with rather coarse rammed-earth mixed with small stones (the rest of the wall).

The exact date of execution of these murals remains unknown although it is thought to belong to the end of the 17th century, when the building was completed and ready for use. The author is also unknown although it presents the same technique (or belongs to the same team) as the rest of decorative paintings of the convent.