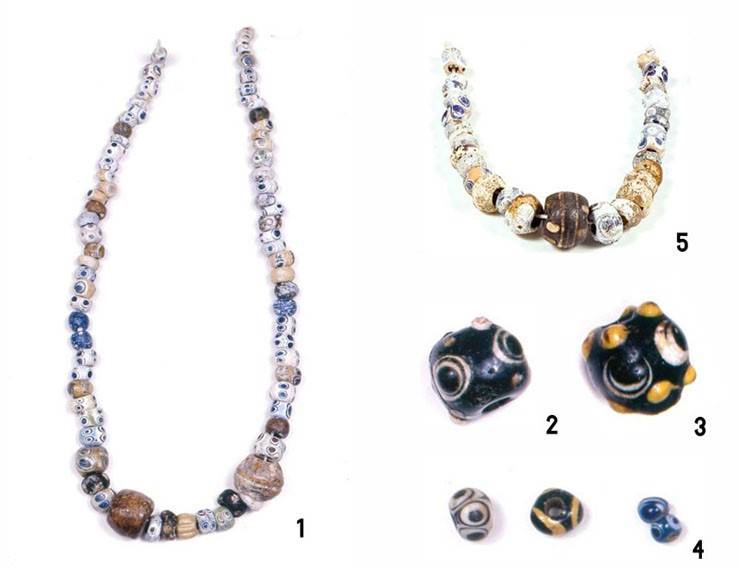 These beads are made of a combination of silica and oxide using the sand core technique in ovens that reached cooking temperatures between 900ºC and 1100ºC. These relatively low temperatures result in carbonic gas bubbles that remain inside the molten mass, giving the cast glass its opaque appearance.

The location of the workshops in which these pieces were manufactured is still debated, although most researchers believe that this area must be found in Punic settings located in the central and western parts of the Mediterranean. Some authors suggest that Italic workshops where faience beads were produced provided technological improvements in the methods of manufacturing and the ovens used to create cast glass objects.

Margaret Murray, in her archaeological works carried out at the settlement of Trepucó, discovered the patio of a house from the most recent stage of Talayotic culture, from which a large quantity of cast glass beads were withdrawn, along with a series of technological items that she interpreted as being the necessary instruments for the creation of such beads. The archaeologist Joan Carles de Nicolás gathered this information from several articles, although, as he explains, substantial review of the recovered materials and further field work are necessary to be able to confirm the existence of such a workshop.

The arrival of these products in Menorca would have taken place around the late 5th or early 4th centuries BCE. It is highly likely that they first arrived as objects for the local elite, so as to open the island's market to the Punic world, which did in fact occur at the beginning of the 3rd century BCE. These beads arrived in greater quantities than at earlier times and were accompanied by amphorae, earthenware and other items produced in Sardinia, Carthage, the south of Italy or Ibiza.

In the Punic world, these cast glass pearls were used for personal decoration as well as on necklaces, bracelets, or even in adorning textiles and leather goods. They were also used as funerary objects at burials. Upon the terracotta figurines of the goddess Tanit, we can observe necklaces made with such cast glass beads. The eye-shaped or ocular decorative form has both preventive and apotropaic purposes that protect the owner of these objects from evil spirits and the evil eye.

For Talayotic communities, these beautifully colorful beads would have been highly attractive as ornamental objects, as only a small portion of society could afford them. In addition to the decorative value of necklaces and bracelets made with these beads, they also possessed great symbolic and religious value to the island's society. Those who possessed these eye-shaped beads would certainly be protected from the evil eye.

As is the case in the Punic world, most examples that have been discovered on the island were used within a funerary context, and in Menorca's case, these were burials in quicklime that took place from the 5th to the 2nd centuries BCE inside man-made caves. Their presence in a domestic context and in rituals is strictly residual.

These objects were at times gathered around the deceased, which leads us to believe that the beads were part of necklaces or bracelets, or were even placed individually next to the deceased or spread around the burial chamber. The presence of just one bead associated with an individual has lead us to believe that the beads may also have been used as amulets, given their unique nature. The dispersal of the beads around the funerary chamber in man-made caves has been interpreted as a ritual in which they were intentionally scattered around the whole of the inside of the cave. Later studies have suggested that this dispersal is due to alterations caused by actual rituals of burial, as the lime burns the bodies and other objects present breaking apart necklaces, followed by the removal of any remains for subsequent burials, hence spreading the beads around the funerary chamber.

In the 3rd and 2nd centuries BCE, many of the island's inhabitants were part of the Army of Carthage as mercenaries, most often slingers, and were exposed to new religious ideas and rituals which they then incorporated into their own religious beliefs and customs. The cast glass beads may have been one of these inclusions.