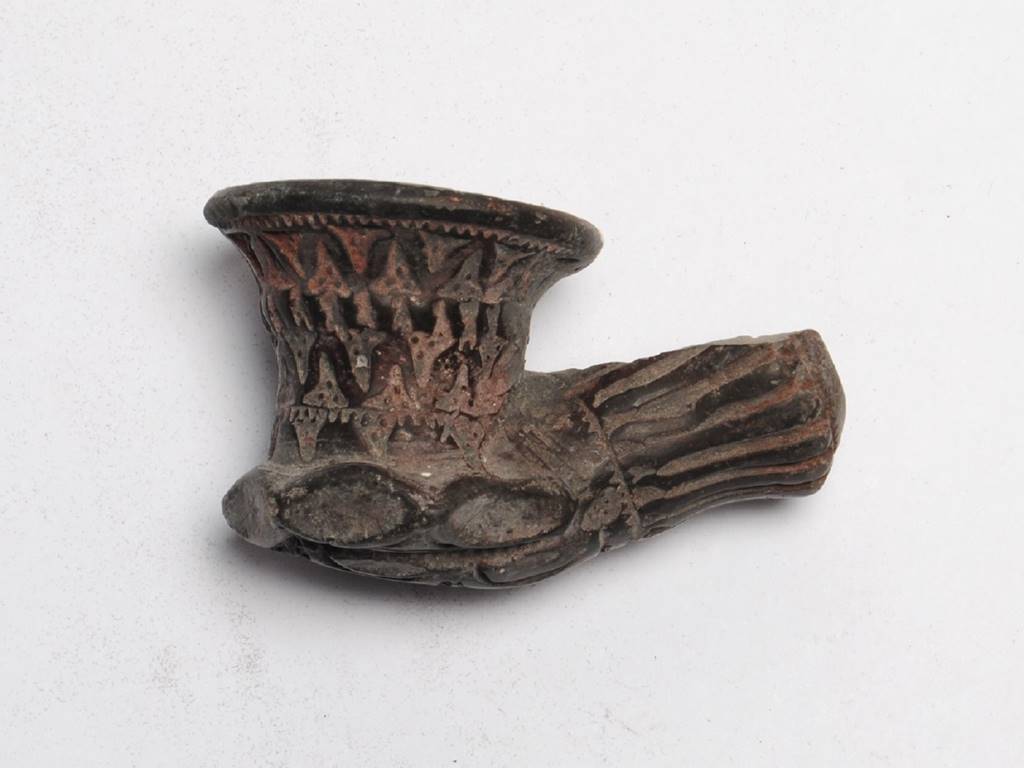 Material and technique: Earthenware and pipeclay, made with a double cast

In 18th century Menorcan artwork we can see different clothing and also other items which complement these scenes. One example is this watercolour drawing by Pasqual Calbó, Los jugadores de cartas (The Card Players), featuring a group of people around a table with various different objects such as an oil lamp, some playing cards and two smoking pipes.

The smoking of tobacco and the very first pipes used by the North American Indians were introduced to Europe in the 16th century. The countries who then started to make pipes were England, Holland and France. The former made pipes from white clay, which would later develop into the manufacture of the famous 18th century tobacco pipeclay. They started making pipes in Spain in the 18th century, particularly in Catalonia, the Balearic Islands and the Basque Country. Smoking became much more common everywhere after the 19th century.

Pipes were widely used in Menorca. Generally made from moulded and fired clay, they had three parts: the chamber or bowl, the shank and the heel, where the mark went. We can tell the provenance by the type of clay (red, black, white, glazed), while some also bore the manufacturer’s mark. We have evidence of red clay pipes made in local workshops both in the 18th and 19th centuries and to date, as in the case of the clay manufacturer in Ciutadella, Arturo Gener. These are simpler, although some have decorative carving on the bowls. The larger ones are known here as “galip”, deriving from the English “gallipot” (an earthenware and wicker pipe).

However, it is from the Menorcan archaeological sites that we have the greatest variety of pipes, some local and others from England, Holland and Eastern countries: they have been found in Trepucó, Trebalúger, Sa Raval des Castell or from dredging in Maó harbour, among others.

An example is this white pipe known as tobacco pipeclay or creamware, made from a paste of white clay and calcined flint. The name for this clay pipe originates from the cream-coloured pipes of Chinese smokers that the English manufacturers in Leeds, Derby and Staffordshire made so fashionable in the mid-18th century.