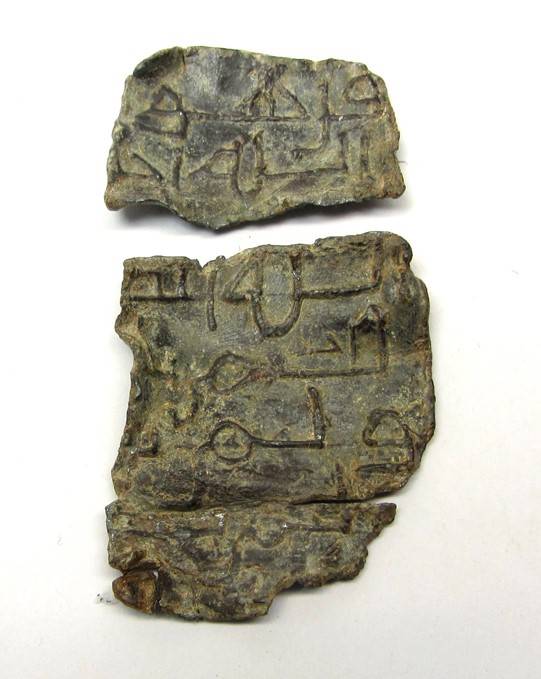 This small lead plaque with carved epigraphy was found in 2010 at the Torre d'en Galmés settlement, during the excavations carried out by Boston University in the north sector of area 8 in building number 2. It is a rectangular room that has been construed as the kitchen of a Islamic Middle Age dwelling that most certainly had to be suddenly abandoned due to a violent incident. Researchers of Boston University proposed the following:

"The discovery of the intact kitchen with all its items in place; pans, dishes, jars and even the fireplace ashes, led our archaeologists to believe that it may have been abandoned in January 1287 when the Almogaver troops of Alfonso III, following the orders of conquest of the king, arrested a large part of the population. The family was taken by surprise and most certainly tried to escape. We do not know exactly what may have happened, but what it is true is that they never came back to the house and left everything right in its original place. It is possible that someone came back to the kitchen soon after the conquest, because some pots and pans were discovered out of order with rocks on them that were possibly used to destroy them".

The amulet or hirz is both a magical and religious object that protects the person wearing it from negative influences. Magical, on one hand, because it helped keep away malign forces and the “evil eye”, and religious, on the other, since the epigraphs usually present correspond to the Koran. These artefacts are hung from the neck as a necklace, inside a pouch or woven into clothing. They appear both in the household as well in necropolises, next to the dead.

These lead sheets are usually found folded over into three parts. This fact may mean that inside there would be a paper or parchment with a prayer or a propitiatory formula.

According to Bernat Moll, who has studied our small plaque, it has a seven-line inscription  of Sura CXII "The pure faith" (surat-al-ijlas), that states:

Has never been engendered

He has no equal

The Almohad period, that in Menorca went from 1202 to 1287, was a time of great religiosity that established a new Islamisation that affected all social strata. Regarding popular culture, this can be appreciated in observing the large number of these amulets or hirz, which are the equivalent to the Christian religious medals.