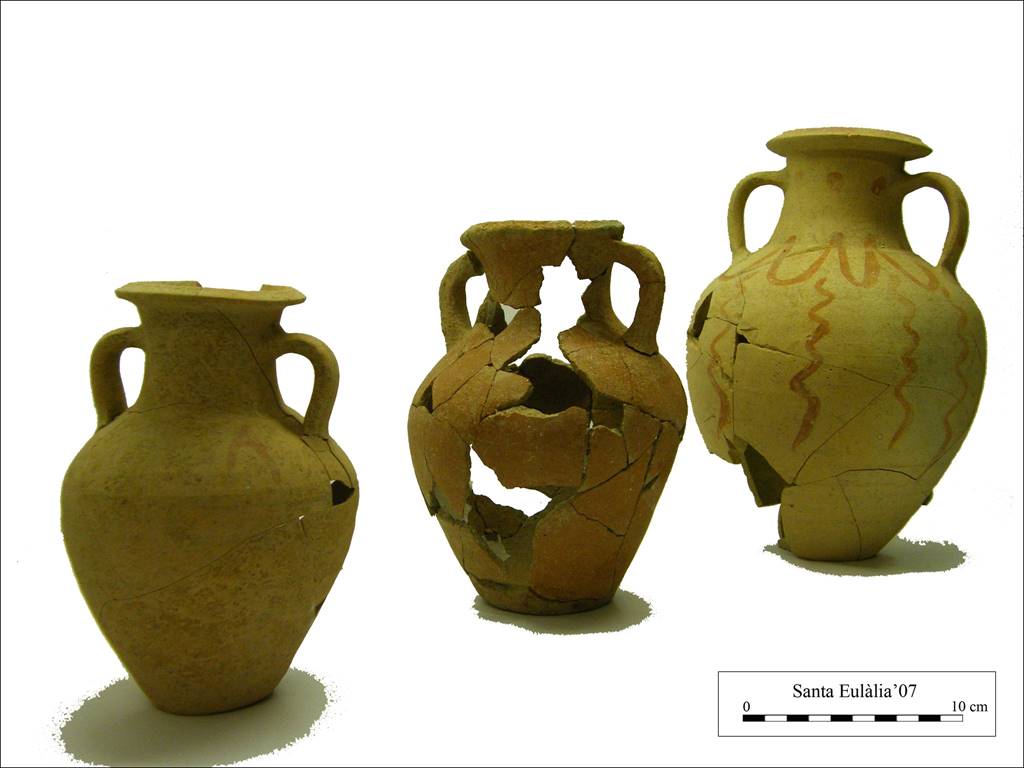 In October 2007, during the renovation of the inside of the church of Santa Eulàlia in Alaior, the remains of an ancient building were discovered. Four walls that enclosed a rectangular space of 6 x 10 m were found. The building that once stood in this spot was demolished and the remains of the walls covered by a very hard lime mortar.

A 1 x 1 m sondage was carried out along the southeast side wall. The result was a sedimentary thickness of 1.2 m. The first 80 cm resulted as expected: we documented dismantled human bones and the remains of burials performed inside the church well into the 19th century.

The most surprising fact from an archaeological point of view was found in the last 40 cm: ceramic remains from the Islamic, Roman and Talayotic periods. And a large stone block that reminds us of a Prehistoric structure.

With the financial support of Menorca's Island Council, the staff from Patrimoni Arqueològic i Cultural SL excavated half of the building. At the surface, a series of skeletons were found along with niches that has ties to the present day church. Modern niches divided the space in two. To the northwest, under the modern level, a layer of reddish compact earth was found where 6 skeletons were buried.

These burials had clearly taken place in the building made up of the four demolished walls before the present church was erected. Stratigraphic evidence proves this to be the case, although the most evident proof is the fact that the wall of one of the present church chapels cut off the legs of two skeletons at knee level. Radio carbon dating shows that one of these individuals died between 1310 and 1430. This fact and the small dimensions of the building indicate that these were remains of the first church built in Alaior, just after the conquest of 1287. A second, more precise dating could prove this hypothesis.

To the southeast of the modern niches, no Midde Age burials were found and even older remains had been conserved. An earthen layer of dark colour showed substantial iron scoria, roof tiles and ceramic from the Islamic period. Therefore, where we find Santa Eulàlia church today were ironworks or an ironsmith when Alaior was the hamlet of Ihalor.

Nevertheless, the most relevant remains appeared under this Islamic layer, almost touching the parent rock. The first row of a primarily circular wall built using large stones had been preserved, with Prehistoric pottery all around, which is actually a Talayotic wall inside Santa Eulàlia church!

Not much was left of this wall and the ceramics were in pieces, although further findings were yet to come. The last corner to be excavated held one last surprise: the mouth of a large silo!

The silo was actually a water reserve from the end of Prehistory that had been refilled with stones and earth. It was more than two meters deep and almost two meters wide at its widest point. It was not completely excavated; about 1/3 of the diameter was not dug out because it fell outside the excavation site.

From within the debris no material remains were found, although at the bottom, in a layer made up of greyish silt we recovered a magnificent group of pottery objects. There are four outstanding Punic-Ebusitan objects and one of local creation.

The first artefact that we will describe (SEU’07-73-2) is a small jar made in Punic Ibiza. It is almost complete and presents three parallel line groups painted in wine-brown colour. This object is very similar to those the scholars studying these ceramics call Eb-23b shape, made during the 3rd and 2nd centuries BCE. However, the few we know have shorter necks, the walls are more parallel, and have straight mouths, not lobulated like ours. Only seven other Eb-23b from Ibiza archaeological sites are known, one from Na Guardis in Mallorca and one coming from Calescoves (Menorca). On the other hand, another almost identical one was found in Ses Talaies de n’Alzina settlement (Ciutadella), although it presented no decoration and the base was not found. Therefore, we are before an exceptional object that could be an evolution of the Eb-23b shape.

Objects SEU’07-74-58 and SEU’07-74-59 are two small jars also made in Ibiza. They correspond to the Eb-60s shape as for type, although it is difficult to classify them as a specific type. Due to their small size, they could be compared to Eb-65, dated to the  5th  century BCE, although if we look at the shape of the handles and the slender body they rather correspond to Eb-64 or Eb-69, although the latter are generally more elongated. In both cases these types were made for a long period from the 4th century until the 2nd century BCE. Regarding the rim shape, our objects would be the most modern. On the back of the SEU’07-74-58 there is an "A" painted in a reddish brown colour.

This leads us to object SEU’07-73-28, because, although it is very similar in shape and size to the two previous ones, it is not made in Ebusus. This jar is a reproduction of the previous shapes but made with local materials and using the Talayotic technique, that is, handmade using clay rolls.

During the last centuries of Menorcan Prehistory many ceramic objects arrived to the island from different areas around the Mediterranean, therefore it is usual to find local reproductions of these shapes. However, despite interest in new shapes, the local population did not adopt the potter's wheel or use of refined clays, and continued using their own traditional ceramic production techniques.

Finally, we have saved one of the most astounding ceramic objects recently found in Menorca for last. It is a large jar, possibly an Eb-69, made in Ibiza and remarkable for its state of conservation and its floral decoration. We have not found this object's equal (SEU’07-73-1), neither regarding its shape, exact size nor decoration. There are many Eb-69 examples, but the ones conserving decorations only present a few sets of lines running around the object. This is truly an exceptional case. It must have been an important object for those who used it, because when it was broken, someone collected the pieces to repair it using lead staples; of  which one is complete, and the other only part.

Therefore, the archaeological excavation carried out at Santa Eulàlia church helped us to document the complete phases of occupation of the hill where the settlement is found, from Prehistory until present time, and evidenced a group of exceptional pottery objects belonging to the last centuries of Prehistoric Menorca.