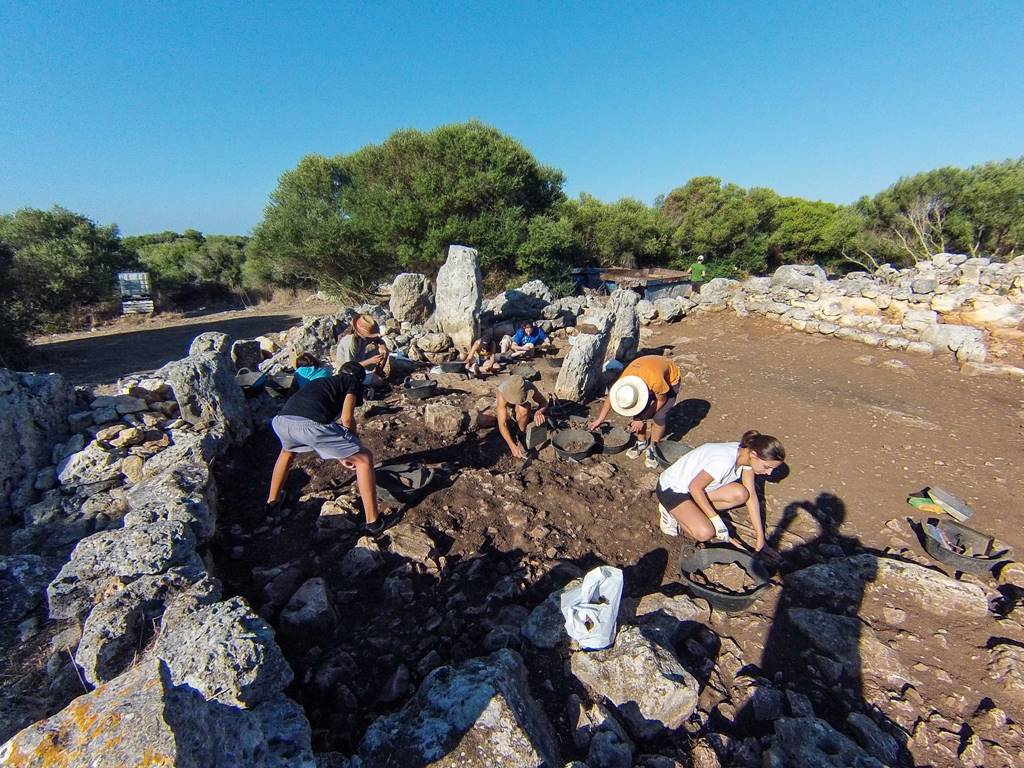 Every summer, since 1997, the Amics del Museu de Menorca association carries out an archaeology course, which is the association's most important project. The course goals were clear since the very beginning: to contribute to the improvement of the archaeological knowledge of Menorca, to collaborate on excavations and the consolidation of prehistoric buildings in order to improve our archaeological sites, as well as to train any persons interested in this field. The student profile for these courses has mainly been that of university students on History, Archaeology and Restoration degrees, but also other older people with different and varied profiles who are also interested in archaeology. Hence, we have been able to meet and share our job with people who have interests in common and therefore get on well which results in us having unforgettable groups. Initially these groups were mainly made up of Spanish people, although gradually foreign people have been joining the groups and thanks to them, these experiences have been even more interesting, if possible. To date, people from Belgium, France, Italy, Australia, Chile, Argentina and North America have taken part in these working groups. Proof of the success of these trainings and of the associations’ spirit has been that some of the most dedicated students have stayed on and joined the permanent research team.

Aside from the students on the archaeology course itself, we have had the unmeasurable support of many volunteers who have come over altruistically over the years to devote a few weeks of their holiday time to archaeological work.

This year, the Amics del Museu association will continue the excavations on the south side of the Torre d'en Galmés village; more specifically, in the front courtyard of circle 6, an excavation started in 2013 and that must be resumed. We will also work on the thick stretch of wall to which the courtyard or circle 6 is attached on its south-east side. During this summer campaign it is expected that areas 1 and 2, the central area of the courtyard, as well as the prominent hole that dominates the north side of this central area, will be completed. Having said this, what are we expecting from this excavation campaign? We expect to be able to know more about the economic and social uses of the spaces laid out around this building as well as about the historic evolution of the southern part of the Torre d'en Galmés village. Furthermore, the digs along the wall stretch could shed some light on, not only the domestic area we excavated but also on the defence systems used during the second Iron Age. Additionally, it would obviously be very interesting -although difficult to dig- to empty the largest part of the rocky and earthy debris that has collapsed over the centuries into the mysterious hole carved by humans and that crowns the courtyard of circle 6. It has to be said that currently we are already planning the safest and most practical way to work in it during the summer. We must acknowledge though, that to date we have very little information about what this hole is and how old it is.

However, the Archaeology School of the Amics del Museu de Menorca association does not only carry out open-air archaeological research, which means excavating in the mornings. It also ensures that excavations come after having taken theoretical and practical lectures by specialists with different backgrounds alongside outings and cultural visits, and numerous kinds of experiences around our little stony island, Menorca. Furthermore, the team of archaeologists at the Torre d'en Galmés village is preparing new activities and new courses for September 2016. Therefore, we would like to increase the number of courses we offer and, hence, offer September courses devoted to practical and research studies carried out in the archaeological laboratory: the classification and inventories of ceramics, digitalisation of planimetries, creation of databases, etc. The intention of this new proposal, in which there will be all kinds of experiences regarding the Menorcan archaeological patrimony, is that anyone can have the opportunity of learning about an archaeologist’s everyday life, once an open-air archaeological excavation has been completed and closed. Furthermore, those people interested in both courses -the one in July/August and in September- will be able to combine into one course the two most common approaches to modern archaeology: field and laboratory archaeology.

In short, like every year we are looking forward to receiving many students from here, there and everywhere. Most of them, young people from all over the world, eager to live unforgettable experiences thanks to Archaeology and History -in capital letters- and to get to know a cultural and natural environment, such as Menorca- perfect for this kind of activity.

But, what has the Amics del Museu de Menorca association been doing over all these years? How many goals has it achieved? On which structures has the association worked and what contributions have been made to the understanding of Menorcan archaeological heritage, thanks to our research?

The archaeological excavations that the Amics del Museu de Menorca association has been carrying out since 1997 have contributed to many scientific results. From the beginning, the association has worked on domestic dwellings, starting by excavating the remains of a house at Talatí de Dalt. This house, which is in very good condition in some parts, allowed us to understand more about domestic areas in the second Iron Age and also its later uses, in particular during Menorca’s Roman period. Continuing with its excavations on dwellings, Amics del Museu started to work on the Torre d'en Galmés site in 2000 by digging building 1, a Talayotic house belonging to the second Iron Age but significantly altered during the Roman period and especially during the Islamic Middle Age. The exterior walls are the ones conserving traces of the Talayotic period, whilst the interior has been significantly modified due to these posterior uses. It may be that the house continued to be mainly used as a dwelling during the Roman period, whilst in the Islamic period, thanks to the digs, it has been discovered that the building was used to carry out industrial tasks such as casting metals. The house produced some interesting material, amongst which there was a piece of ceramic, which after the analysis of content carried out on it, is known to have contained a sort of purée made from cereals.

Between 2005 and 2010, the Amics del Museu association continued its work with the excavation of circle 7, a Talayotic house in very good condition and dated between the 6th to 3rd centuries BCE. The findings inside the house were amazing, because all evidence seemed to prove that the house was left suddenly and many of the materials recovered were found in an excellent state of conservation. Thanks to this, we were able to determine the use of virtually every space inside the house. We find several areas in which household tasks were carried out, such as processing or storing food or to produce fabric and threads. Likewise, the most striking finding was that of the remains of six people buried in the courtyard. With regards to this dig, the front courtyard of circle 7 was excavated and the results showed that it was an area used to shelter animals and possibly to process food. Inside the courtyard a large silo was also excavated, where very interesting materials were discovered, such as a piece known as  asc  made by Talayotic people and with a cow’s skull on top of it. Lately, the association has excavated the front courtyard of circle 6 in order to follow the scientific line marked by the Amics del Museu association, with the aim of knowing more about the village layout and the historic evolution of the Torre d'en Galmés village on its southeast side.